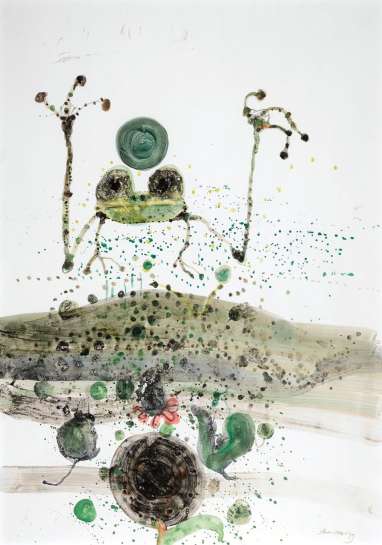 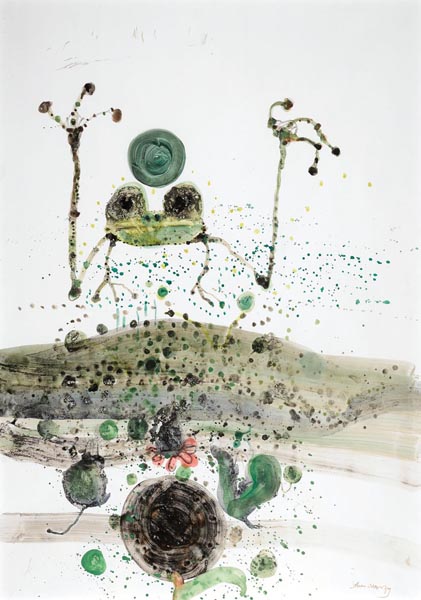 An environmental conservationist before it was fashionable, John Olsen was one of Australia’s first modern artists to draw out the beauty in the minutiae of Australian landscape and ecology. His awakening to Australia’s astonishing natural diversity came in 1971, through his involvement in the ABC’s Wild Australia series. Hired to contribute his creative perceptions of the unique wildlife and landscapes documented, Olsen’s deft and insightful observations provided a viewpoint previously unavailable to the scientists on the program:

‘[While] the camera was still waiting for the essential degree Kelvin…John could freeze the dancing leap of the brolga…caricature the gulping pelican chick feeding from its parent’s maw, and merge a hundred banded stilts into one amorphous protected flock.’1

Olsen’s first interactions with frogs came about while on the set of Wild Australia, and having been instantly gripped by their strangely anthropomorphic quality and compelling physicality, they remain a recurring and important subject in his work.3 ‘[T]he frog…is just as important as the eagle or the tiger; every movement is connected to the primary source of life.’3 In Olsen’s handling, the frog becomes a metaphor for the fragile yet irrepressible nature of life itself. Olsen sees in the frog, and wants us to see too, not just the universe, but ourselves, and our relationship to the living world.

Frog in a Pond is a quintessential John Olsen frog painting, both comic and profound. This work draws on Olsen’s interest in Chinese and Japanese art and Buddhist and Taoist symbols. Olsen has said: ‘The Chinese and the Japanese through the Taoists and Buddhists are just so divinely subtle. They are the first ecologists. Man is an organism related to every living thing.’4

Olsen’s frogs are usually depicted undertaking froglike business: draped over tree branches, eating flies, swimming. Captured leaping towards us, this frog seems burdened with more metaphysical concerns, floating meditatively above the pond like the sage referenced in the Tao Te Ching ‘… the sage, because he does nothing, never ruins anything; and because he does not lay hold of anything, loses nothing.’5 The flat line of the frog’s mouth and black expressionless eyes evoke the inscrutability of mystics. The circle positioned behind the frog’s head and reflected in the surface of the pond, is rich with symbolism, referencing the interconnectedness of nature (of which man is a part), the wheel of reincarnation, our Earth and the sun, which generates life itself.

The artist describes this microcosmos with typical restraint and mastery of his medium, using an economy of deliberate brushstrokes similar to Zen brushwork. Unlike the Eastern tradition however6, Olsen chooses the ungainly frog as his subject and allows a hint of chaos to enter his work. The spattering of droplets perfectly recalls the movement of water suddenly displaced, but the very application of these drops necessitating random chance is also a reminder of the disorder inherent in the natural world.

Frog in a Pond is illustrative of Olsen’s respect for ‘the mystical, observable factor’7 found in cave paintings worldwide. What Olsen is referring to is the capacity for art to describe something essential about the nature of nature, or more accurately, how we as humans perceive nature to be. It is nearly impossible for us to look at animals without projecting onto them our own characteristics. Olsen’s depictions of animals always manage to capture that something essential. Perhaps not always anatomically correct, but always resonating with our feeling of how frogs and birds exist in our world. This is why, tens of thousands of years later, Kimberley rock art paintings are instantly recognisable. It is also why, when we see Frog in a Pond we recognise the frog, the pond, the movement, the whole world. 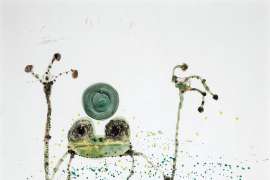 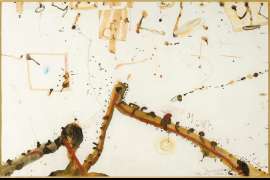 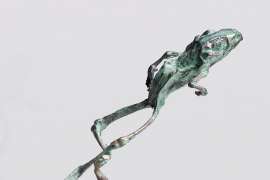 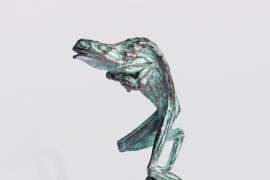