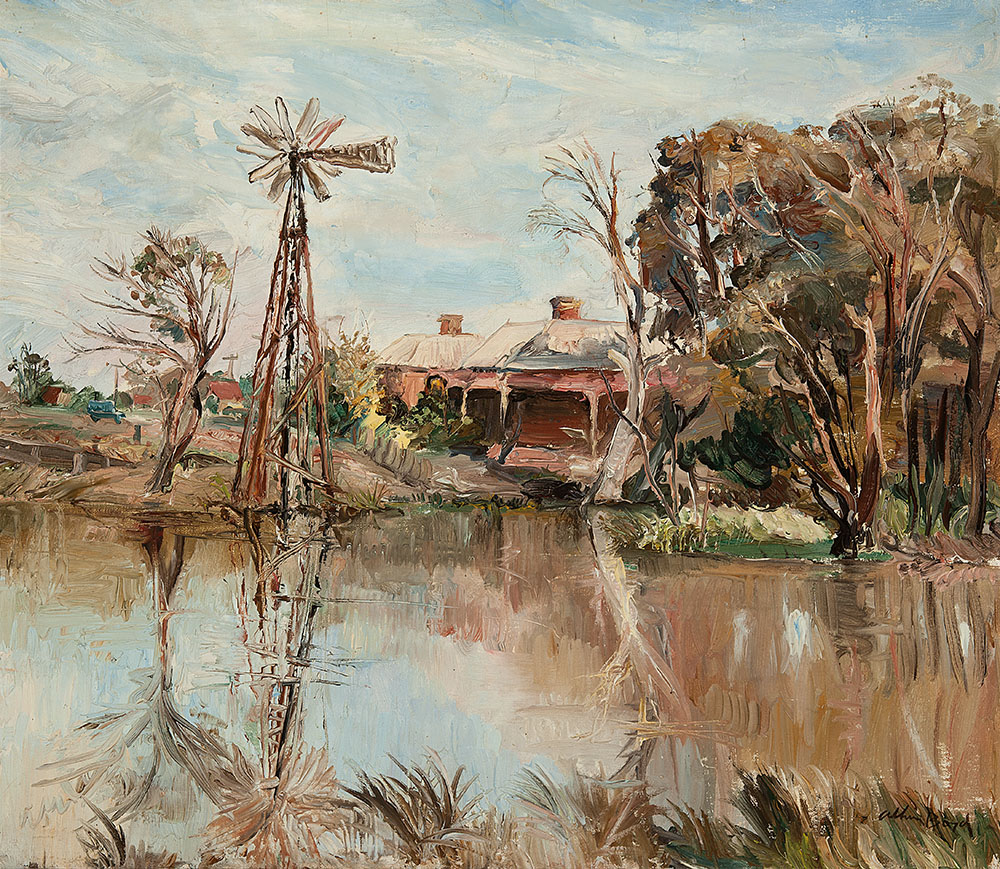 Arthur Boyd’s first Wimmera landscapes were conceived in the summer of 1948-49, when he accompanied the poet Jack Stephenson on a painting excursion to Horsham. Considered the regional capital of the Wimmera area, Horsham is set to the north of The Grampians on the banks of the Wimmera River, approximately 300 kilometres north-west of Melbourne. With its flat, sun-parched paddocks and endless horizons, the wheat-farming district presented Boyd with such a stark contrast to the lush, undulating terrain of Berwick and Harkaway (which had inspired his series of ‘Brueghelesque’ idylls), that the artist found he required a new visual vocabulary in order to capture the landscape. Barry Pearce, in his introduction to The Art Gallery of New South Wales’ 1993 retrospective exhibition catalogue, describes Boyd’s discovery of the area, which was to become a major source of inspiration: ‘…he painted landscapes near the border of the Wimmera River, and was to return on several painting trips to the far north-west of the state over the next few years. He discovered there the hint of something that had drawn other painters of his generation, a subject tentatively recorded by a few artists of the nineteenth century, and touched on by even fewer in the twentieth: the empty spaces of the great interior.’1

After a period of focus on ceramics, the late fifties saw a revival of Boyd’s landscape painting. These landscapes were painted in conjunction with his landmark series, Love, Marriage and Death of a Half-Caste, produced between 1954-59, and demonstrate a great duality in Boyd’s art. Discussion of this synchronous multiplicity of style and subject matter is customary in all writings on Arthur Boyd, and with good reason, for he was unfalteringly good at it. Ursula Hoff remarked in the epilogue to her 1986 study of Arthur Boyd that ‘an outstanding feature of Arthur Boyd’s oeuvre is its great variety. Landscapes, impressionist or expressionist, alternate or combined with figure scenes; erotic or fantastic subjects occur alongside biblical or mythological scenes… He can work simultaneously in different pictorial modes, from lyrical landscapes to allegory, or both combined. The secret of Boyd’s fecundity of invention is his sense of kinship with the whole world of art; past and present merge in his imagination.’2

Perhaps the best way to appreciate Horsham Billabong, 1958-59, is to read it as an amalgam of visual observation, artistic experience and emotional response. It beautifully encapsulates the complexity of the early Wimmera paintings, whilst alluding to the more nostalgic views of Boyd’s early impressionist representations of Beaumaris and Rosebud. With its relaxed handling of paint and plein-air treatment, one sees a stylistic tendency not far removed from the mid-fifties depictions of Gaffneys Creek and the areas north east of Melbourne that Boyd so loved. Whilst Horsham Billabong is not imbued with the desolate drama of the desert, the work does exude a mood of calm acceptance comparable to that found in the earlier Wimmera landscapes. There is no dramatic dialogue between man and nature, simply the suggestion of habitation, via the blue car to the upper left of the canvas, the somewhat deserted buildings of the background and middle grounds, and the incorporation of Boyd’s highly inventive motif, the windmill, which was to shortly after morph into one of his most iconic and recurring themes: the bride turning into a windmill (see Bride with Lover or Bride Turning into a Windmill, 1960).3

In essence, this is a work created during one of the most pivotal moments in Boyd’s career. The critical success of Love, Marriage and Death of a Half-Caste (or Bride series 1954-59), ensured that in 1958 he was selected to be co-representative with the late Sir Arthur Streeton (1867-1943) at the Venice Biennale; eight works were shown, all of which were landscapes. The same year saw the birth of his second daughter, and in the following year Boyd lost his father. In 1959 he signed the Antipodean Manifesto together with Charles Blackman (born 1928), John Brack (1920-1999), Robert Dickerson (1924-2015), John Perceval (1923-2000), Clifton Pugh (1924-1990), Bernard Smith (1916-2011) and David Boyd (1924-2011) and by the end of 1959, Boyd was ready to move his family to London to test his work on the international stage. By July of 1960, he had already held a solo exhibition at the Zwemmer Gallery (consisting mostly of Bride paintings) and had been approached by Bryan Robertson, director of the Whitechapel Art Gallery, with the offer of a retrospective exhibition to be held in 1962, cementing his standing as Australia’s leading artist of the day. 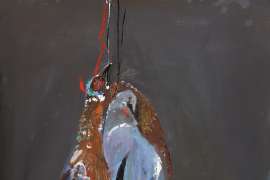 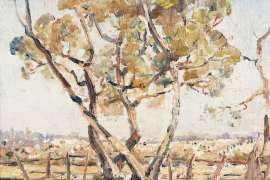 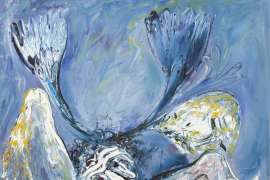