In 1983, Andy Warhol was commissioned to create several limited edition screenprints for the occasion of his upcoming travelling retrospective exhibition in Japan. After first making contact through Gaston Petit (born 1930), a Canadian priest and artist stationed in Tokyo, the brief for America’s most renowned living artist was soon determined: Japanese flowers, to be produced on Japanese paper, using a Japanese printer.1

During these nascent negotiations, Warhol was provided with film photographs of cherry blossoms and chrysanthemums of the season, the flowers themselves bought at bargain price in bulk from a florist in the heart of Shibuya, Tokyo’s commercial centre. Drawn to the latter, Warhol selected the blooming chrysanthemum (‘Kiku’ in Japanese), an enduring emblem of longevity and nobility, most significantly the symbol of the imperial throne and Japanese emperor. Based on these pictures, Warhol made a rough trial print before sending to Tokyo based-printer Ishida Ryoichi at the Gendai Hanga Center to finalise. Renowned for their collaborative spirit and contemporary innovation within Tokyo’s art landscape, Gendai Hanga was ground-breaking in its efforts to promulgate screen-printing as a medium for a new generation of Japanese art collectors, but moreover in its commissioning of over 700 artworks in association with eighty artists of varying practices.2 Though Warhol had toured Japan as a young unknown commercial artist in 1956, his national exhibition over 1983-1984 cemented his reputation at the forefront of American art and in turn the seduction of American consumerist culture for the Japanese, Warhol himself concomitant with New York as the world’s centrifugal cultural capital. While The Warhol National Exhibition would exhibit in museums as far as Hokkaido in the north to Okinawa in the south, the corresponding Warhol Tokyo 365th Exhibition brought his work across art, video and music to Tokyo’s galleries, bars, discos and retail stores.3

As art historian Benjamin Buchloh has written, Warhol was ‘well-prepared to reconcile the contradictions emerging from the collapse of high culture into the culture industry and to participate in it with all the skills and techniques of the commercial artist. He had freed himself early on from outmoded concepts of originality and authorship and had developed a sense of the necessity for collaboration and a Brechtian understanding of the commonality of ideas.’4 The Kiku works bring these ideas to a splendid fore, highlighting the virtuosity of Warhol’s screen printing practice and its material egalitarianism and collaboration, whilst further reconciling paradoxes of power, autonomy, and the bounds of high and low culture through his idiosyncratic lexicon: ‘extreme close-up fragments and details, stark graphic contrasts and silhouetting of forms, schematic simplification, and rigorous serial composition.’5

Turning to the simulacra of the photographed bulk-bought bouquet rather than nature itself, unlike his famous Flowers series composed of stamp-like hibiscus petals spliced and squashed into tight collaged quadrants, Warhol’s chrysanthemums linger across their colour-field and stained spaces, only kept from floating off the surface by the delicate interconnectivity of luminous hand-traced outlines. Burgeoning against the gradient twilight hues in Kiku #307, underlying layers seem swept up as though loose brushstrokes, flowing fragmented petals delineated by glowing gestural scrawls. In Kiku #308, from the colour-blocked backgrounds of grey, pink and blue ground burst two blossoms in radiant contrast. Reminiscent of traditional Japanese woodblock prints of single stemmed chrysanthemums sprouting vertically up the space, here the golden laced silhouettes bloom outwards from the negative space into the third-dimension. Culminating in Kiku #309, the clustered chrysanthemums transposed at various overlapping angles emanate from under layers of blues and pinks before ebbing back again, barely clinging to their slightly offset outlines of greens and blue that disintegrate under their own abstraction.

each numbered and signed below image

each accompanied by a certificate of authenticity from Martin Lawrence Galleries, United States of America

ALL CURRENT & PAST CATALOGUE WORKS BY ANDY WARHOL 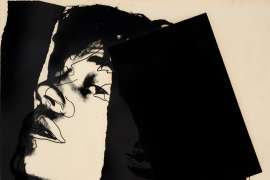 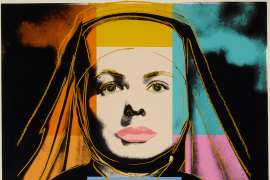 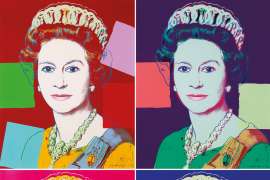 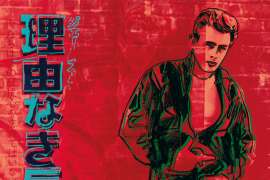 Lot 25
Andy Warhol
Rebel Without a Cause (James Dean)