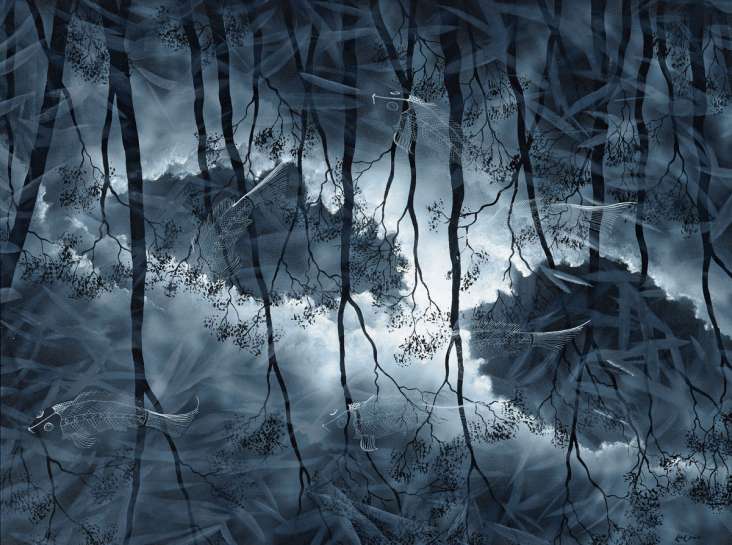 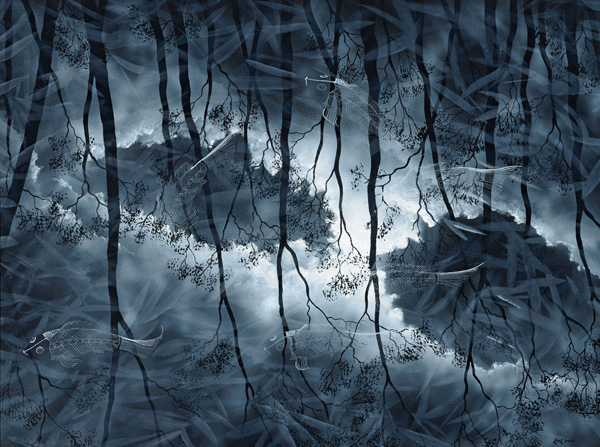 By Jane Raffan
Lot:
Moonlight (from the Twenty Four Hours at Numerili suite)

Yorta Yorta artist Lin Onus was a master painter and political mastermind. Often masked by the beauty of their aesthetic thrall, his works are poetic and potent statements of Indigenous cultural authority.

Moonlight stems from a sublime, seemingly ethereal corpus depicting water bodies carefully contrived with technical virtuosity as interwoven layers of imagery, elements of which are sometimes, at least initially, obscured by reflected sky or reflected landscape, or both.

Depicting contradictory and ambivalent space was Onus’s political forte. These works question narratives by challenging one’s ‘viewing position’— preconceptions and assumptions—in a transcendental aesthetic engagement about cultural hegemony. Within this paradigm, dreamlike visual effects operate to make transparency illusory and reality confused. Onus’s nocturnes are particularly successful in this regard, wherein the obscured stands in for something other than the unseen: his ‘understanding of what lies beneath the surface of things.’1

In Moonlight, the central luminescence of the cloud-obscured moon transfixes … at first, and then we glimpse life beneath the dark patches of inky water either side. In the shadowy depths, fish decorated with rarrk slip in and out of water weeds. Tracing the underwater dynamic, we are drawn around the edges of the canvas, searching. What else lies beneath? Stepping back, the upside-down tentacled trees reflected on the surface take command, their strong black verticals barricading the viewer from the world seen/unseen beyond ... reality check. And from this viewpoint back on terra firma, the central two patches of dark water suddenly come into focus and appear strangely mask-like … but who, or what, is being masked?

Onus’s deep connections to Arnhem Land and kinship with acclaimed artist Djiwul ‘Jack’ Wunuwun (1930-1991) enriched his physical self and spiritual world view, and animated his mixed race/mixed cultural ‘in-between space.’2 It also heavily influenced his vision and optimism for his legacy, with hopes that history ‘may see me as some sort of bridge between cultures …’3

Onus’s art requires Australians to think about ourselves, our history, and the country we inhabit, and in 1993, after a string of early career award accolades, he was made a member of the Order of Australia. His oeuvre has been the focus of more than eighteen solo exhibitions, including the important retrospective, Urban Dingo: The Art and Life of Lin Onus 1948-1996 (Queensland Art Gallery, 2000 and national tour 2001), and recently, Lin Onus: Eternal Landscape (Margaret Lawrence Gallery, University of Melbourne, 2019). Group show highlights include the ground-breaking exhibitions: Koori Art ’84 (Artspace, Sydney), A Changing Relationship: Aboriginal Themes in Australian Art 1938-88 (S.H. Ervin Gallery, Sydney), Australian Perspecta 1991 (Art Gallery of New South Wales), Crossroads: Towards a New Reality: Aboriginal Art from Australia (Museums of Modern Art, Kyoto and Tokyo, Japan, 1992), Strangers in Paradise: Contemporary Australian Art to Korea (AGNSW and National Museum of Contemporary Art, Seoul, Korea, 1992), Aratjara: Art of the First Australians (Germany, London, Denmark, NGV, 1993), and Power of the Land: Masterpieces of Aboriginal Art (NGV, 1994).

Onus’s emphasis on reflection and water surface in his mature resolved work has been recently defined as ‘a call for deep consideration of one’s experience of life, or more specifically, to make connections between oneself and the world’;4 a new narrative within and beyond the discourse and post-colonial imperative of decolonisation.

This thinking, and these works, are however no less interpolative than much of Onus’s overtly satirical painted protests. Onus’s declaration that there is ‘no distinction between the political and the beautiful’ manifests itself in his watery landscapes, where ethical questions surface with deep aesthetic engagement.5 As one of the country’s most sought-after artists, and whose work has strong international appeal, Lin Onus’s singular artistic legacy is enshrined.

Moonlight (from the Twenty Four Hours at Numerili suite) 1993

ALL CURRENT & PAST CATALOGUE WORKS BY LIN ONUS 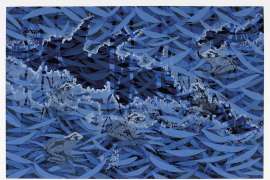 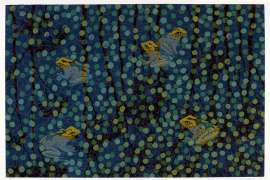 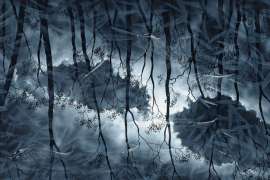 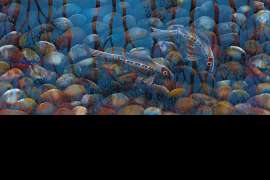