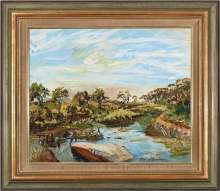 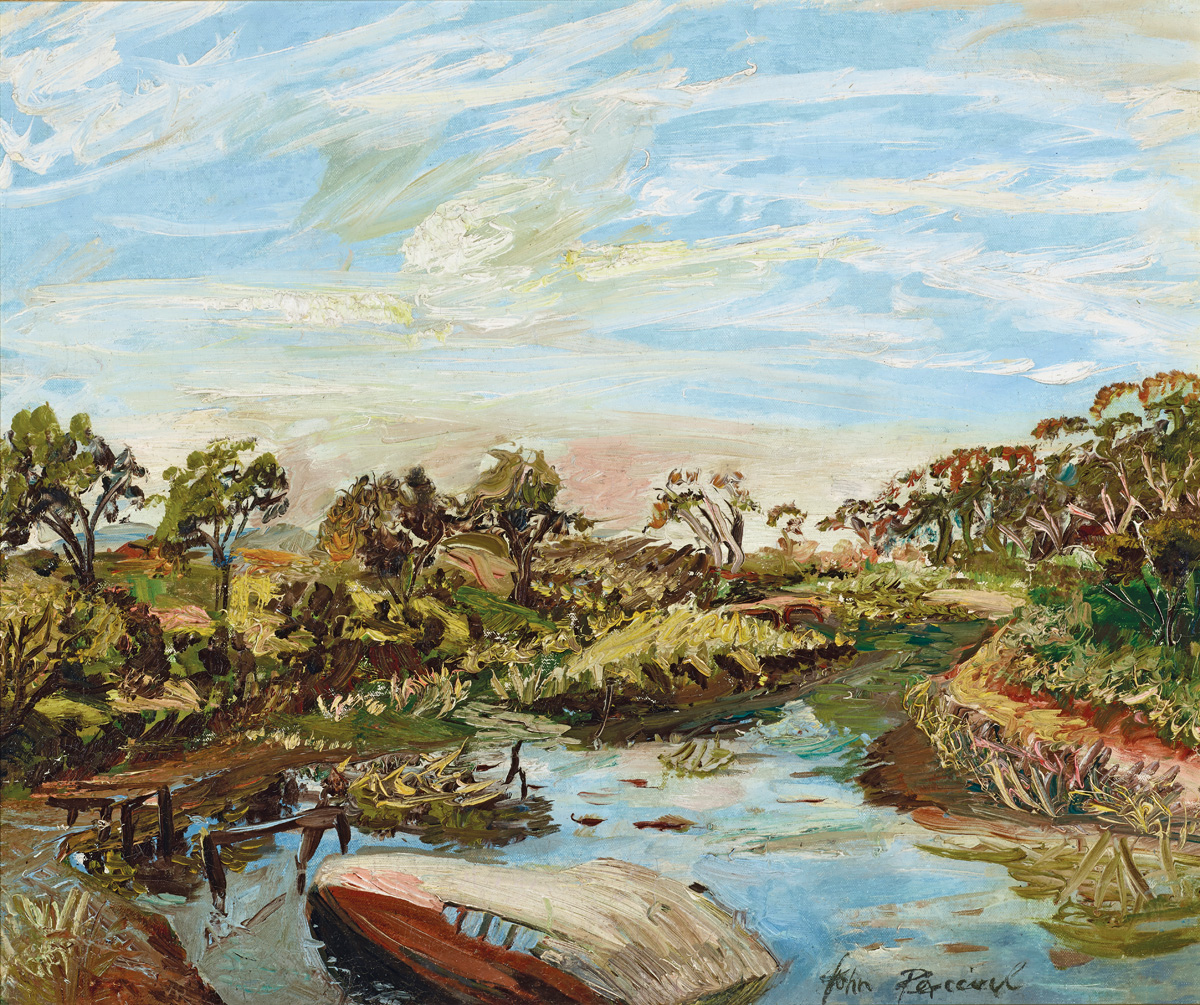 John Perceval’s Mordialloc Creek 1946 tells the story of a close friendship and an evolving artistic style. Perceval was only twenty-three years of age when he painted the work which brims with the talent and confidence of youth. The focus on a small portion of nature; implied human interactions with the land; sparkling expanses of sky and water; the use of strong bright colours, and lively brushwork, have been cleverly set in motion. It is a signpost to where Perceval was and the direction that his art would later follow.

In May 1944, John Perceval married Mary Boyd in a ceremony at the Boyd family home in Murrumbeena in Melbourne’s south-east. The newlyweds moved into the front room of the tiny cottage, with Perceval temporarily taking over Arthur Boyd’s studio at the back of the house. Perceval and Boyd became firm friends, as well as brothers-in-law. Together they (re)established the Boyd pottery studio to make ends meet and continue the family business. At the same time, the two artists satisfied their penchant for landscape painting by embarking on day and weekend sketching trips to well-known locations, mostly within an hour or so from Murrumbeena.

Arthur Boyd had recently restored his father’s old ramshackle Dodge. Now it was possible to carry painting and drawing utensils and materials and seek out subjects further afield. Significantly, most places Boyd and Perceval went to in the immediate post war period were bayside locations where the extended Boyd family had a history of painting – Point Lonsdale, Rosebud, Rye, and Mordialloc. It was as if Arthur was refamiliarizing himself with old haunts and at the same time inducting the younger Perceval into the Boyd family.1 Working in front of the subject the resulting works were a form of imaginative release and joie de vivre after five years of war.

Mordialloc Creek 1946 originates from a trip that Boyd and Perceval undertook soon after peace was officially declared. A pencil sketch by Perceval, signed and dated ‘NOV 45’ is a conveniently fixed date-stamp.2 The subject of an upturned boat, dilapidated jetty and meandering creek, retreating into the distance, formed the basis of the later painting, as does the animated movement in the water and surrounding foliage and trees. Other paintings from the same year show the extent to which Perceval was moving away from his war paintings and images of social displacement.

Mordialloc Creek c1946 is another recently unearthed early picture sold through Menzies.3 Its quaint, jostling boats, Constable-like sky and piquant colours show how he was indebted to Arthur Boyd’s work, who was intent on recapturing the brighter colour palette of the pre-war years. Yet, Perceval was also forging his own way.

Mordialloc Creek 1946 was included in the John Perceval retrospective exhibition of 1966, presented by the Australian National University in association with the Department of the Interior.  Perceval had been one of the first artists in residence at the ANU and seeing these early works again may have piqued his interest as he returned to Mordialloc Creek in 1967. Over the next 18 months he produced eight or so major plein air paintings and a large tapestry of the creek. The latter works are a testament to the advanced philosophical underpinnings of Perceval’s art and his desire to convey nature’s vitality and its zesty sense of ‘order in disorder.’ 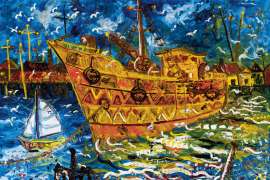 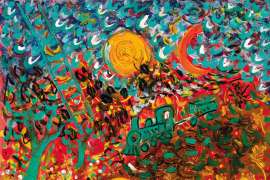 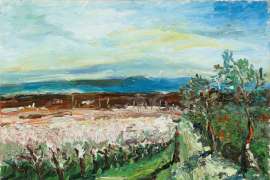 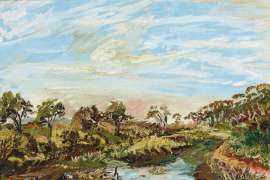