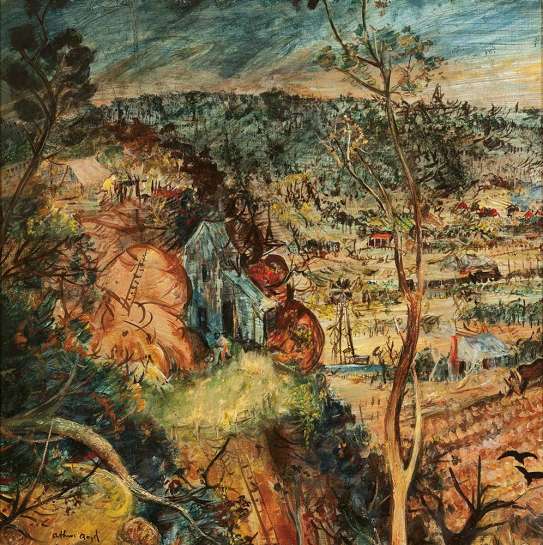 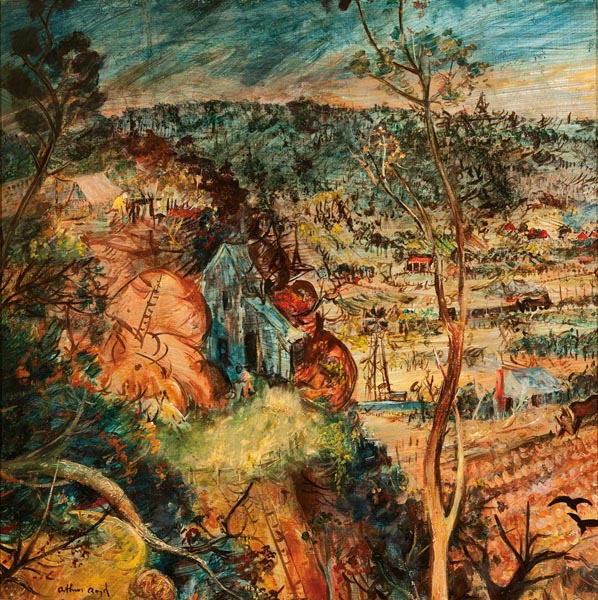 The years following the Second World War were lean times that brought families back together seeking common ties and a meaningful life ‘a world away’ from a Europe mired in conflict. The Boyd dynasty was no different. In 1948 Arthur Boyd’s uncle, the novelist Martin à Beckett Boyd (1893-1972) returned to Australia after a long period in Europe between the wars, instinctively seeking his roots. He impulsively purchased The Grange - the à Beckett family’s rural retreat requiring considerable restoration after it had been out of the family for many years - located at Harkaway, near Berwick, about thirty miles east of Melbourne. For Arthur, this was a seminal place of origin, his grandmother’s family home, and for a period he and his family moved back into the fold. As part of the familial restoration, Martin commissioned Arthur to paint large murals of biblical narratives in Australian bush settings. Although now largely destroyed by renovations in the 1960s, records show these early works to be paintings of a harsh landscape with ‘tree branches blackened by fire’.1 Since this early period of the Grange Murals, blackened tree branches have appeared in many of Arthur Boyd’s paintings. They are one of many signs of Boyd’s deep spiritual connection to the Australian landscape. The current work and other biblical works such as The Expulsion (of Adam and Eve from the Garden of Eden), in the collection of the Art Gallery of New South Wales, date from this important time at Harkaway.

In fact many significant paintings that still survive today were conceived out of this biblical period. It is as if Boyd had found a way forward for his brand of expressive figurative painting. Indeed, later in February 1959, he became one of the founding seven members of ‘The Antipodeans’ group of painters who collectively sought a manifesto for figurative painting so as to rail against what they saw as the encroaches of abstract expressionism. Works from the late 1940s, and particularly those made at Berwick and the later Wimmera works, were instrumental in forming Boyd’s strong and highly personalised figurative path.

As always, it is fascinating to see fine early examples of an artist’s mature style and observe the brushwork, paint handling, approach to layout and compositional devices at work. Stone Crusher, Berwick, 1948, is an intense early painting with remarkable brushwork. Many of the markings are simple drawn gestures in dark paint over a ground that varies from white to pink and deeper red. This light-coloured ground becomes the inner core of the work, over which the drawn elements of the painting are cast. At times, this core still glows through like a spiritual heart, and then at other times the viewer’s eye is retrieved and carried back to watch the drawn elements on the surface of the picture. There are many drawn elements to look out for. Fences are a run of stabbing lines. Black branches are flattened and bent inwards. The hillocks and rocks are stippled in curved forms - a technique for creating rounded form that he perfected in his later series of Brides set in bush-clad vistas with blackened tree forms.

‘The landscape of the Berwick district with its undulating hills, its spinneys of gums, with its cultivated fields, grassy paddocks, small dams and iron windmills, it is finite, formed, half wild, half pastoral, smaller and more densely populated than Australian landscape generally is. It offers both intimacy and width of horizon. Arthur Boyd responded to it with love and joy.’2

This joie de vivre has been noticed by other writers: Christopher Allen recalls that Boyd’s rural paintings of the late 1940s achieved a new serenity ‘in almost idyllic Bruegelian landscape’.3 Indeed, the influence of the Flemish Renaissance painter Pieter Brueghel (1525-1569) is quite noticeable here.  For Stone Crusher is laid down with a high horizon, precise mountainous forms at the cliff-face and an accretion of human activity recognisable through the human by-products of angled ladders, running fences, stationary windmills - but curiously few people. A careful search reveals that there are, however, some individuals engaged in the working spaces of the stone crusher plant, that is, itself, perched precariously on the side of the cliff that it simultaneously quarries.  Is this noticeable darker tinge simply a defeatist’s view of man’s existence on the land? Beneath this cliff, the farming area rolls away. In the right foreground a horned bull paws at the ploughed furrows of tilled soil. All these things are in response to Boyd’s immediate environment. Most importantly, in works of this Harkaway period, Boyd seeks to embrace Berwick’s Australian character, so that the ‘Brueghelian idyll’ is left behind as a compositional device for showing human activity - and the painting becomes an insightful document of Melbourne’s post-war urban/rural boundary. Indeed this painting is both powerfully Australian and powerfully of its time.

Boyd trademarks this Australian identity further with the recurrent motif of a passing cargo train that steams past the windmill in the centre-right of the painting. It is well-hidden and well-intentioned. Trains appear in other works of the Harkaway-Wimmera period: Moby Dick Hill, Near Frankston, Victoria, 1949, where the train remains in middle distance; The Little Train, 1950, where the train moves with wistful charm in centre ground. The notion of freighting agricultural goods to market is at the core of Australian rural life, and Boyd uses trains as a positive symbol of post-war agrarian progress.

All around the canvas the blackened tree trunks do sustain some growth in the form of deep phthalo greens. There are green shoots. A sapling runs to the right of centre, with all branches leading up into the sky. This is strong and positive. But dark clouds gather. The light sky is overlaid with the dark tones of residual paint from a dry brush. And, in their foreground kingdom, two nonchalant black crows reign supreme like confident witnesses to the expulsion of Adam and Eve from the Garden of Eden.