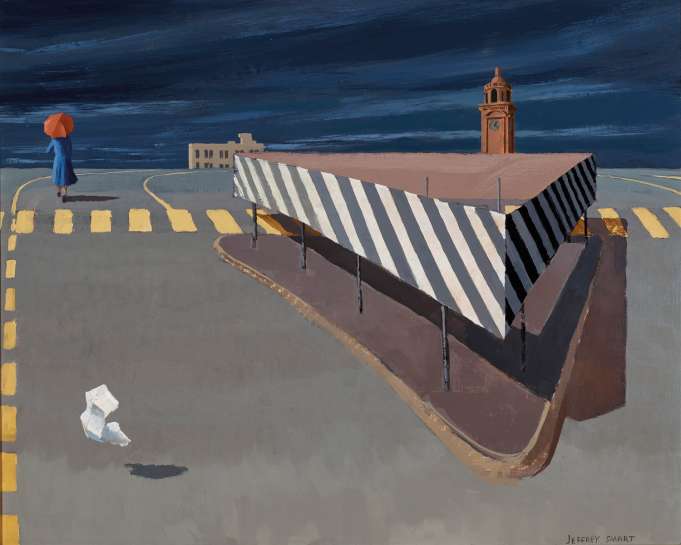 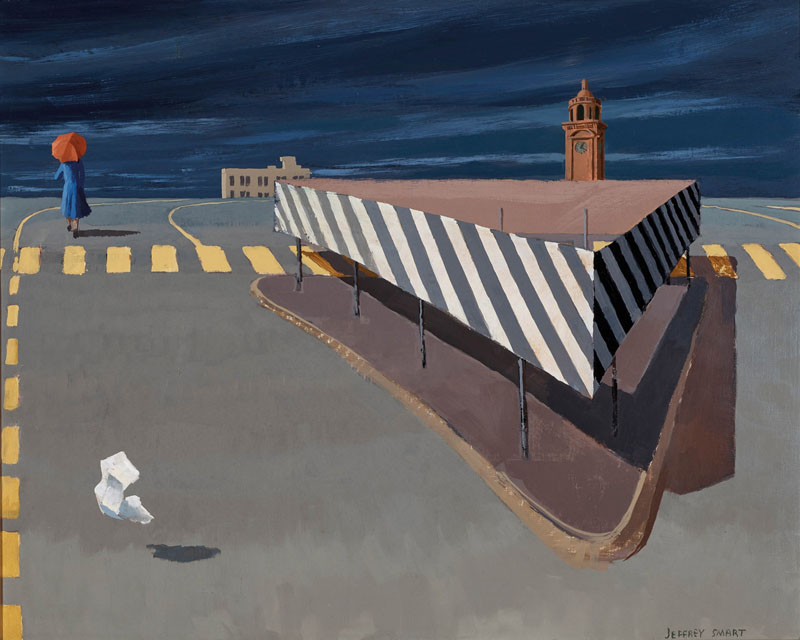 By Tim Abdallah
Lot:
Study for The Island

A solitary woman is walking away from us, strolling down the road of a modern city. There is a breeze: a scrap of paper tumbles across the road. Sharp shadows cut cross the scene and streaks of cloud darken the sky. The woman has an umbrella open and yet there is no sign of rain. Although the image contains elements that add up to the suggestion of a storm, the scene is pervaded by the sort of stillness that we know well from the work of Jeffrey Smart. The action we see is only part of the painting. Much of the somewhat puzzling narrative of the work is created by the intrigue of things possibly happening outside our field of vision, in the mind of the viewer.

We might look for clues to the meaning of the work by closely examining the objects depicted. The banal objects that Smart depicts are enriched and transformed with his use of irony.  The main part of the composition is taken up with a traffic island. Here we have one of Smart’s typically facetious references to the title of the painting. Nothing could be further from any romantic notion of the word ‘island’ than this functionally garish thing. Its large block of diagonal stripes represents the most eye-catching component of the entire composition. This threatens to dominate the scene, so Smart disarms it by propping it on some spindly posts, and then challenges it with another, independent group of lines, zebra stripes, that traverse the painting horizontally, visually but not actually crossing under the island and leaving, at the points they meet, little crises of optical geometry. The upper left extremity of the Island meets the zebra stripe, a post, and the shadow in a tightly composed and neatly rendered, physically credible engagement. This construction has a second stanza at the right-hand side of the composition where the stripes emerge from behind the Island with another, related and varied passage that consists of the same elements.

The effect is musical and almost mechanical. Like much of Smart’s work, it recollects the watchmaker’s art. It is this passage of painting that does all the heavy lifting of The Island. It is the real subject of this painting. Like a well-made clock, Smart’s work is one thing on the face and then behind the face a maze of turning wheels, springs and cogs that are purposeful, precise and sophisticated, and these complications, to use a watchmaker’s term, are the foundation of Smart’s art and the reason that we all value it so highly.

In 1963 Smart was able to realise a long-standing ambition to go to Europe to live and work there. For an artist of Smart’s disposition, the ability to immerse himself in art history was the most important consideration.  By standing in front of great art Smart could draw inspiration. Measuring himself against it was essential to his own progress towards a style of his own. Although some other aspects of his persona might re-enforce that notion, his confirmed interest in the European Old Masters does not necessarily suggest that Smart was a reactionary. His relationship with contemporary developments in Europe was nuanced, at once critical, possibly competitive, and not always respectful. In his work we often find evidence of Smart looking to demonstrate that contemporary art could be a source, and be applied to his own work in a way that lampooned it, but did so in an intelligent way.

Over a career spanning more than seventy years, Jeffrey Smart refined his painting until it was able to serve his particular purpose of creating these intellectual games. This development, evident in his earliest work reached maturity in the early years of the 1960s, when his compositions, his subjects, his technique and his interests are dovetailed into a burnished mature style. The painting that might be recognised as the moment his style was crystallized, The Cahill Expressway 1962 is now an icon of Australian art. Study for The Island, painted in the same year, is a remarkably early example of Smart’s mature style and is a valuable and completely delightful preparatory work for one of the very best paintings of this important era for the artist: his The Island 1962 now in the collection of the Royal Perth Hospital. The composition combines familiar motifs from Smart’s repertoire:   the woman with the umbrella that had been used in his early Procida - Self Portrait with Still Life 1953, reappears in The Road 1961 painted a year before The Island, and was still in use fifty years later in 2003 in The Santiagio Flight II. The figure places the work within the main stream of Smart’s career.  The motif, part visual pointer, part deliberate cliché, and many more things play a vital role in the delicate balance of the components that go to make up the work of one Australia’s most distinctive and best loved artists. 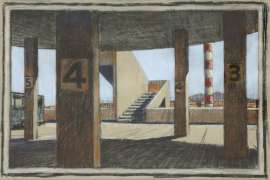 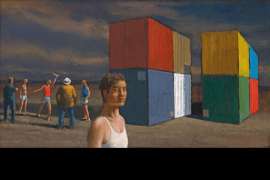 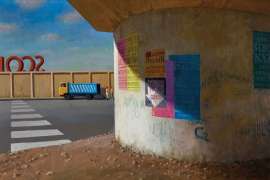 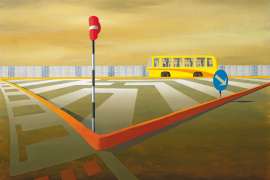