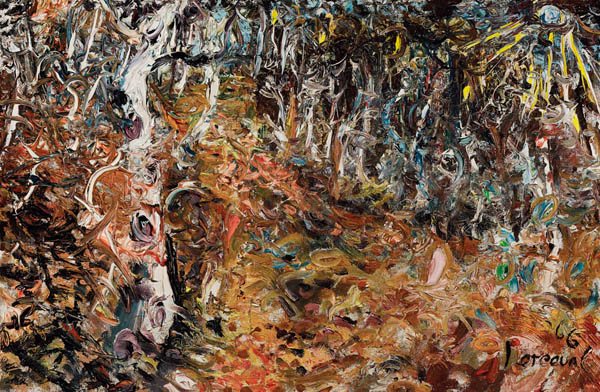 A member of both the Angry Penguins and the Antipodeans, John Perceval’s place in Australian art history is profound.

His career is littered with accolades; most notably, Percevalwon the Wynne Prize in 1960 and was made an Officer of the Order of Australia in 1991 for service to the arts. His works are held in the National Gallery of Australia, all state and many regional galleries.

Despite this success, Perceval’s life was bookended by unhappiness. A protracted period of artistic success lay between a turbulent childhood and a descent into alcoholism and mental illness in later life. Hospitalised at fifteen with polio, he sharpened his interest in art by drawing and reading about the European Masters. Where other boys had photographs of footballers above their hospital beds, Perceval displayed his own illustrations.1 Perhaps the most fateful moment of Perceval’s young life was when he befriended Arthur Boyd (1920-1999) in the Citizen Military Forces at age eighteen, and subsequently moved into the Boyd family home in Murrumbeena. Here, he gained artistic and intellectual stimulation, connections to John and Sunday Reed and their inspired milieu, and even a wife in Boyd’s sister Mary, whom he married in 1944. Boyd and Perceval established Arthur Merric Boyd Pottery in Murrumbeena and throughout the late 1940s produced earthenware ceramics together.2
Despite being so closely tied to the Boyd family, Perceval did not garner as much fame as Boyd and other members of the Angry Penguins. He was not a natural salesman, and his anxiety and alcoholism, which intensified in the 1950s, meant that
he was outshone by the likes of Boyd, Albert Tucker (1914-1999) and Sidney Nolan (1917-1992), though of commensurate artistic merit.3

However, as art historian Bernard Smith wrote, Perceval developed, ‘a truly novel interpretation of Australian bushland landscape,’4 which was wholly divergent from the tough, dry conditions and heroic narratives of Nolan, Tucker and Russell Drysdale (1912-1981). In the 1960s, when the present work was painted, Perceval was hitting his straps in landscape painting, creating mythological, timeless settings that do away with the traditional horizon, and instead completely encompass the viewer, as seen in the present work.5 This tangled bush scene depicts Black Mountain in Canberra, where Perceval moved to from London in 1965 to take up the first Australian National University Creative Fellowship. Perceval layers pigment in this kaleidoscopic painting in a way that initially seems arbitrary but is ultimately, thrillingly, coherent. His divided and repetitive brushstrokes come together to form a typically Australian scene of white trunked gum trees, a bush track and sunshine spilling through the branches. 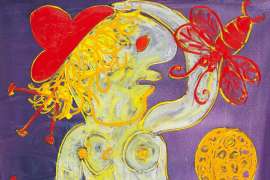 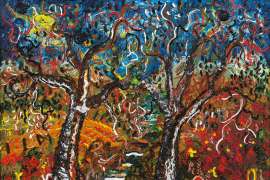 Lot 24
JOHN PERCEVAL
After the Bushfire 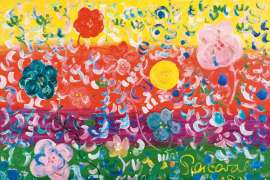