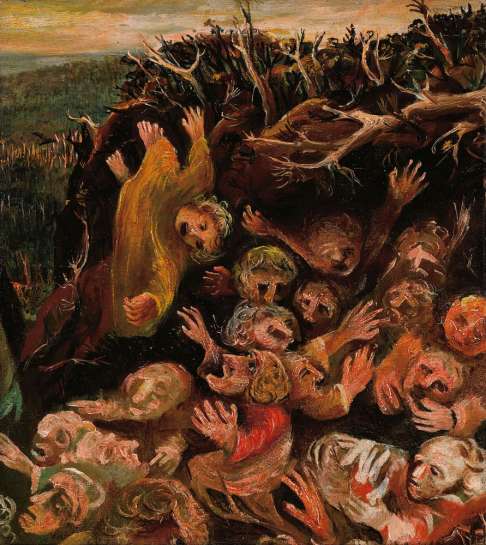 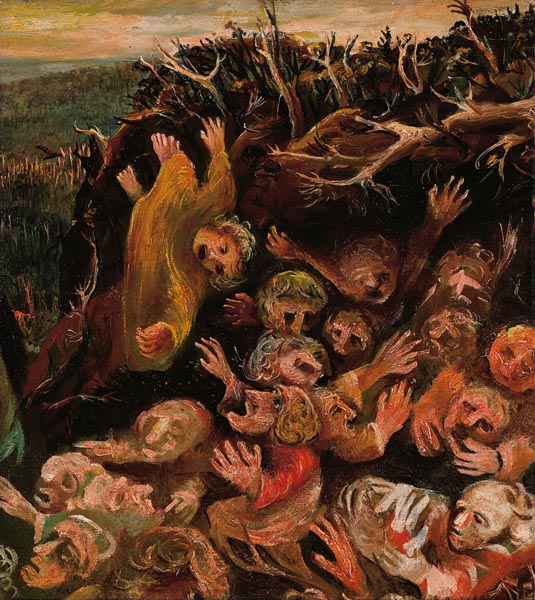 While Arthur Boyd’s unconventional and intensely creative upbringing was in many respects ideal for a prodigiously talented individual intent on an artistic career, it was far from perfect preparation for the constraints of army life.

The Boyd family’s concerns were more spiritual and artistic than domestic, with the artist’s Christian Scientist parents, whose prevailing philosophy was ‘love governs’, maintaining an extreme aversion to violence, even going so far as to prohibit him from pointing a finger and shouting ‘bang bang’ during the course of childhood games.1

The artist’s intense inner life, highly developed social conscience and lack of concern for appearances rendered him temperamentally unsuited to army life, and upon being discharged in early 1944, he returned to the rambling family home at Murrumbeena on the outskirts of Melbourne.  Here he lived with his extended family, which included fellow artist John Perceval who had married Boyd’s sister, Mary, in the same year.

This highly creative period saw Perceval and Boyd spending their free time revisiting the prints of Hieronymus Bosch (1450-1516) and Pieter Bruegel the Elder (1529-1569) which they had discovered in the early years of the war, with the artist recalling that:

At the Melbourne Library were some very good books of reproductions. I remember Bruegel and Bosch who particularly impressed me. Their inventions, especially the most macabre seemed very apt to our time.2

Boyd clearly made connections between the disturbing imagery which he discovered in the works of these artists and wartime newspaper reporting, later recalling that during this period ‘newspaper accounts and photographs had the most violent influence on my development as a painter.’3

Key works from this period take inspiration from the sprawling vernacular allegories of Bruegel not only in terms of their subject matter, but also with regard to materials. Boyd’s discovery of the 1921 publication, The Materials of the Artist and their Use in Painting by German artist Max Doerner, led to early experiments in egg tempera, including The Golden Calf of 1946 as well as the current work, possibly from the same year.4

Ursula Hoff recalls Murrumbeena at that time as being a hive of domestic and artistic activity amounting to a ‘picturesque artists’ colony’ not dissimilar to Bruegel’s depictions of rustic industry:

Arthur introduced us to the mysteries of the egg tempera technique, the colours standing ready-mixed in pots among tins of clean brushes of all sizes. The domestic scene seemed to spill over into Boyd’s and Perceval’s Bruegelian paintings which filled the walls. It left such a vivid impression that to this day the Murrumbeena of my memory resembles the world landscapes of Pieter Bruegel...5

However, Boyd’s powerful biblical-themed paintings of the mid to late 1940s are not mere emulations of the Bruegelian imagery which obviously resonated so strongly with him at that time.  In these strikingly original works, the artist infuses suffering of biblical proportions with a deeply personal note which is grounded in the Australian landscape, rather than a European setting.

In The Golden Calf the artist depicts a writhing sea of human confusion, while the current work is an emotionally intense scene tightly focussed on a despairing group of individuals tumbling helplessly towards a fate which they are unable to control. Yet in both works the relationship between this riot of human activity and the landscape which frames it is a complex one. The vegetation immediately surrounding the human subjects appears to take on the characteristics of their suffering, most noticeably in Untitled (Biblical Painting) c1946, in which distorted tree limbs mirror the imploring gestures of the figures below.

However, in both works the artist provides an uncanny counterpoint to these scenes of mortal fallibility by offering a glimpse of undisturbed bucolic serenity. In The Golden Calf a hay wagon makes its way unimpeded across the upper left of the canvas, seemingly oblivious to the human drama being enacted nearby, while in the upper left of Untitled (Biblical Painting) c1946 a solitary bird hovers serenely over a timeless expanse of bush. Here the artist depicts a moment beyond the realm of human experience in which a solitary avian witness remains impervious to the dramatic evocation of human suffering depicted below. The close proximity, yet utter unattainability, of peace and stability heightens the intensity of these already emotionally charged scenes.

The current work, as with other poignant and highly sought-after biblical paintings from this early period, employs the techniques of the Old Masters to communicate the artist’s emotional response to the world around him through a powerful amalgam of contemporary, historical and natural imagery.