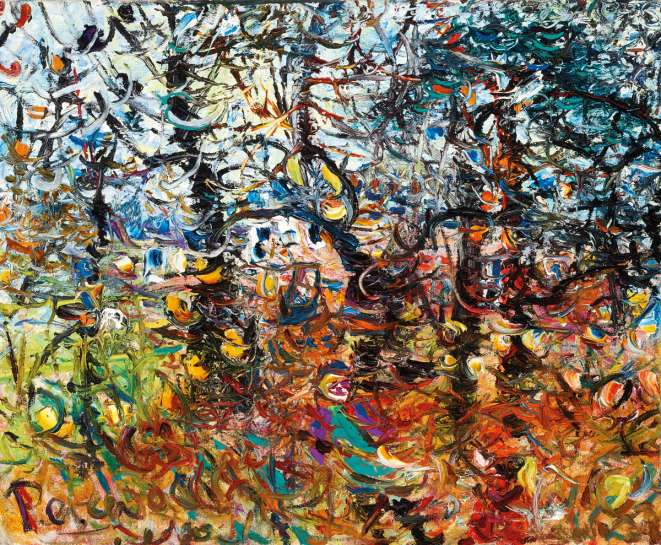 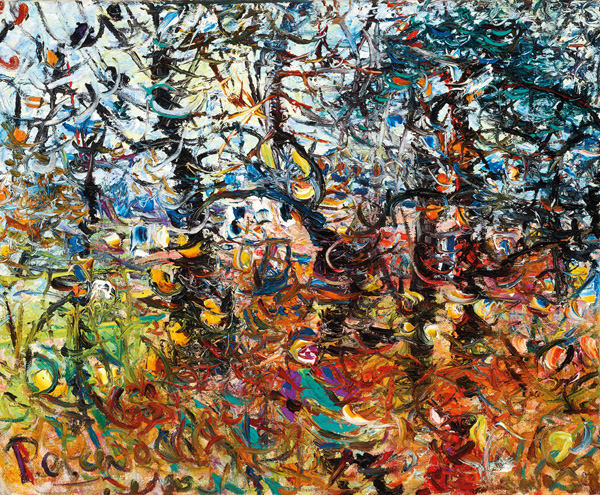 John Perceval made an immediate impression when he and his family moved from Melbourne to London in early 1963. Settling first with their friends, Arthur and Yvonne Boyd in leafy Hampstead Heath, the Percevals soon found their own house close by in Highgate. Once there, Perceval quickly settled into painting – inspired by the rambling gardens, heaths and parks located nearby. A group of 20 new paintings under the title ‘The Seasons’, and a selection of ‘The Angels’ ceramic sculptures that he had brought with him from Australia, were exhibited at the prestigious Zwemmer Gallery, London, in March 1964. Charles Zwemmer was renowned for his support of famous modern English and European artists. The exhibition effectively launched Perceval’s international career.

When the Percevals first arrived in London, they had been struck by the severe wintry conditions, reputedly Britain’s worst in over a hundred years. Mary Perceval recalled ‘every growing thing was frozen black … the landscape looked as though it would never come alive again.’1 With the coming of spring, John Perceval discovered the transformation from the stark monotones of the English winter to an explosion of riotous spring colour, abundant light and leafy textures. The resultant paintings are a direct response to witnessing this transformation and the difference from the Australian seasons. As Perceval conveyed in a letter to Sunday Reed: ‘I have just about painted out the woods of Hampstead and Highgate but just when I feel it’s done the season changes and I have to see it all over again – which of course is just what I like…’2

Windy Walk 1963 belongs to the first flush of paintings produced in London, portraying Perceval’s Highgate house and garden. The two older Perceval children, Tessa and Celia, had ‘found an overgrown, walled block of land with an archway and through it another overrun plot they called their secret garden’.3 Perched on a low stool and propping up each canvas with a stick, Perceval proceeded to paint his way through the thick labyrinth of foliage. Bearing titles such as Alice in the Chestnut Tree, Tangled Arch in the Deserted Garden, Girl Running through a Thicket, Summer to Autumn and Setting Sun, each of the paintings was a response to a particular seasonal moment and a homage to his family. The paintings display an obvious joy in the children playing and exploring or enjoying family picnics or strolls.

What sets these works apart from the ones he had produced back in Australia was the degree to which figure and ground are integrated into one unified surface. In Windy Walk, and related paintings – Suburb through the Heath and Winter Walk, both 1963 – Perceval pares back the middle ground and constructs an armature of tree-trunks across the surface. Against this rhythmic ensemble of black lines, Perceval builds a rich and dense story of the kaleidoscopic texture of the foliage and leaves, penetrating light of the sun and flurry of activity initiated by his children. The result is pure Perceval – a rich cacophony of colour rendered in van Gogh-inspired impasto and exuberant, pure pigment squeezed straight from the tube. It is as if, through the act of painting, Perceval and his family have been physically subsumed into the long grass, soggy leaves and dense thicket.

Despite Perceval’s figurative leanings, works such as Windy Walk bear comparison to the all-over action paintings of Jackson Pollock, the celebrated American Abstract Expressionist painter. Art historian Bernard Smith described paintings from Perceval’s ‘The Seasons’ series, when they were exhibited at the Australian National University, Canberra, in 1966, as ‘a kind of action painting controlled by visual intuitions.’4 Oil paintings in which Perceval celebrates the tactility of the medium and the process of putting it down harmoniously and with gusto. 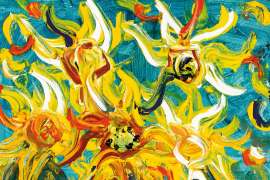 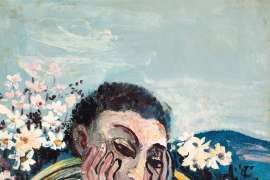 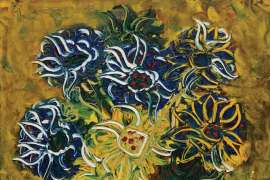 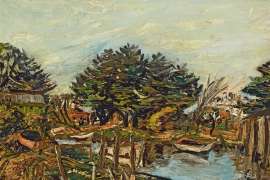